Welcome to the PlatinumGames Wiki

The wiki about PlatinumGames, a games company responsible for many great games.
All pages can be edited and you are welcome to join us and contribute to this wiki!

PlatinumGames Inc. (プラチナゲームズ株式会社) is the independent video games development company responsible for Anarchy Reigns, Bayonetta, MadWorld and much more, it is based in Osaka, Japan and was founded on August 1st 2006 under the name Seeds Inc. by Hideki Kamiya, Atsushi Inaba and Shinji Mikami, who were former members of Capcom's Clover Studio, a games company responsible for games such as Ōkami and Viewtiful Joe. The current CEO and president is Tatsuya Minami, who founded ODD Inc. in 2006, this company was later merged with Seeds Inc. to form PlatinumGames on October 2007. 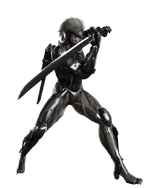 Raiden (雷電), real name Jack, is the main protagonist of Metal Gear Rising: Revengeance. Raiden was a Liberian-American mercenary and former special forces soldier. Previously a child soldier under Solidus Snake, Raiden was later selected by the Patriots to test the S3 Plan at the Big Shell, as a new recruit to the reformed FOXHOUND unit. He later worked alongside the Paradise Lost Army in their anti-Patriot activities, but was captured and forced to undergo heavy cybernetic experimentation. After successfully escaping, Raiden went on to assist Solid Snake during Liquid Ocelot's Insurrection.